Phan Thiet is a coastal city of Binh Thuan province on the South Central Coast. Located on National Highway 1A, about 180km from Ho Chi Minh City to the Northeast, this place not only attracts tourists by the beautiful natural scenery full of sunshine and wind, but also an attractive cultural tourist destination with Chinese residential communities, Cham people, ... Phan Thiet climate is divided into two seasons: rainy season, distinctly sunny, less windy, sunny and less stormy, suitable for fun activities and tourism all year round, especially in June and July.

Duc Thanh School is located at 39 Trung Nhi, Phan Thiet city, founded in 1907 by patriotic scholars to respond to the Duy Tan movement in Trung Ky. 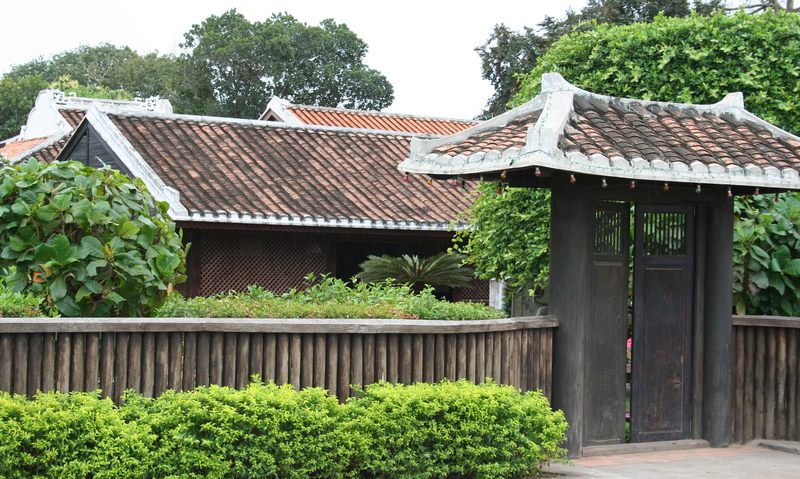 Until now, the ancient school with more than 100 years of history is still preserved almost intact. This is also an important historical place, marking a part of President Ho Chi Minh's life - where he stopped and taught before entering Saigon to find a way to save the country.

3km north of Mui Ne town and stretching about 1km of coastline, Mui Ne Fishing Village has a symbolic beauty of the coastal city of Phan Thiet, portraying the life and culture of the people of Binh Thuan. 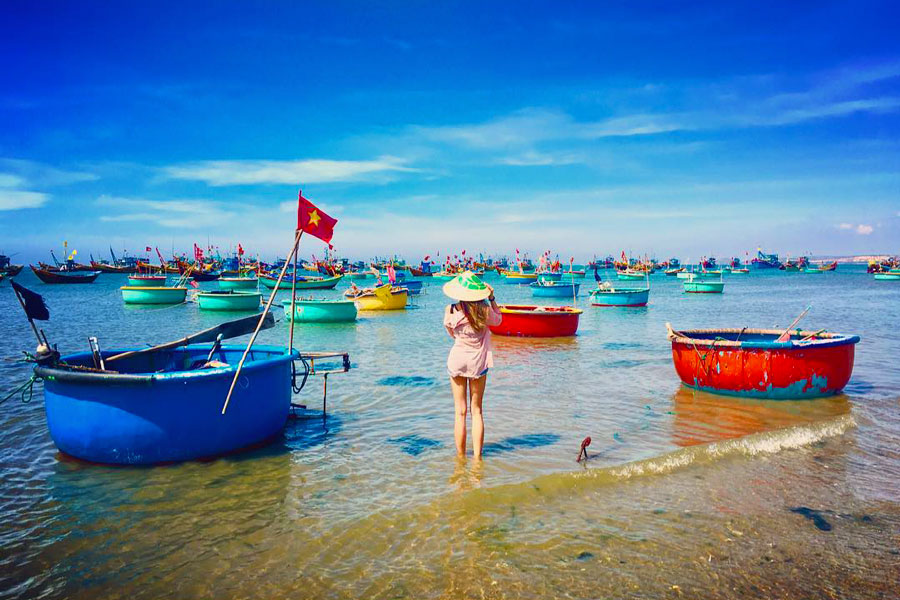 Different from the bustle of Mui Ne beach, this place brings a feeling of peace, very dear, mixed with coconut trees on Huynh Thuc Khang street and hundreds of colorful fishing boats anchored on the water. But in the early morning, Mui Ne fishing village is extremely bustling with fishermen's trade. You can both enjoy and buy quality fresh seafood at extremely low prices compared to the prices in big markets, even by them processing on the spot to bring back.

Ong Hoang floor is located on the top of Ba Na hill, started construction on February 21, 1911 with an area of 536m2 owned by a French duke - De Montpensier, later sold to a hotel owner French people and eventually bought by King Bao Dai as a resort. It is only about 100 meters south of Poshanu Cham Tower. 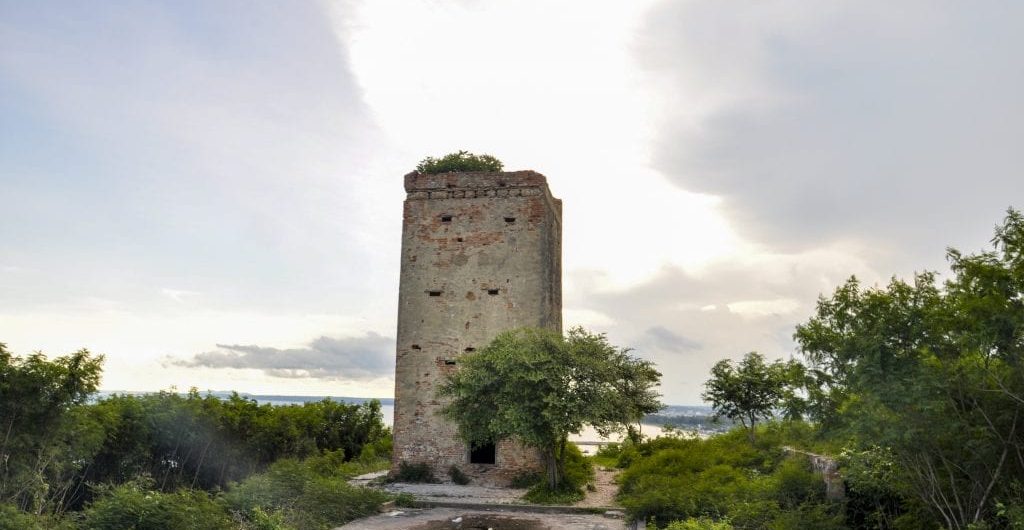 The work is built according to French architecture, it is associated with the name of poet Han Mac Tu, is the dating place between him and Mong Cam - the lover of the poet. He has written many poems about the charming landscape here.

Poshanu Cham Tower, also known as Pho Hai Cham Tower, is located on Ba Nai hill, in Phu Hai ward, about 7km from the center of Phan Thiet city. On the way from Ho Chi Minh City to Phan Thiet, you can visit both Thap Cham and Ong Hoang floors because they are only 100m apart. 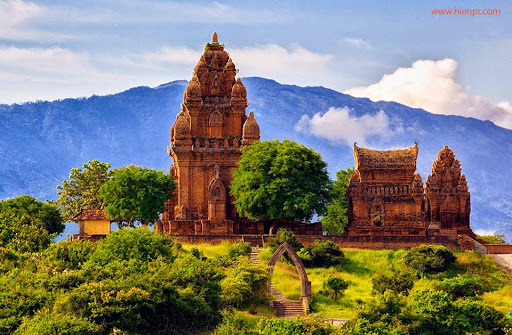 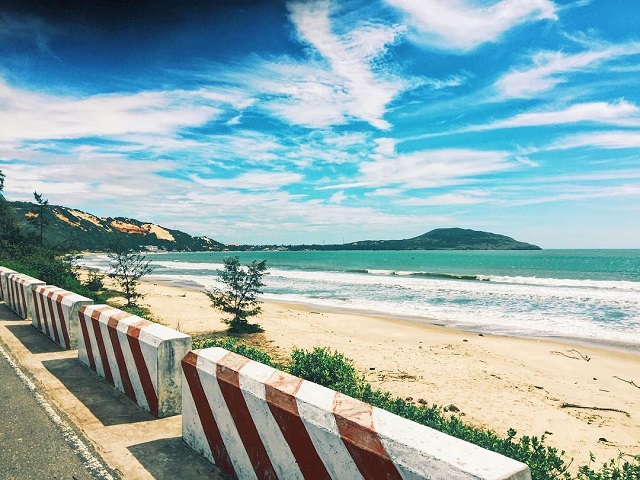 Rom Islet includes many small beaches such as Rom 1 Islet, Rom 2 Islet, Thuy Trang, ... crystal clear sea water, smooth waves without reefs are tourist attractions here for relaxation. In addition, there are many other interesting activities such as sunrise, sunset, camping, night cruising, skydiving, water motorcycling, or sailing to the sea to catch seafood with locals.

Rang Beach is located about 15 km north of the city center, under the romantic coconut trees. In the summer, Rang beach also attracts tourists by the sweet grilled green dragonfish dish. 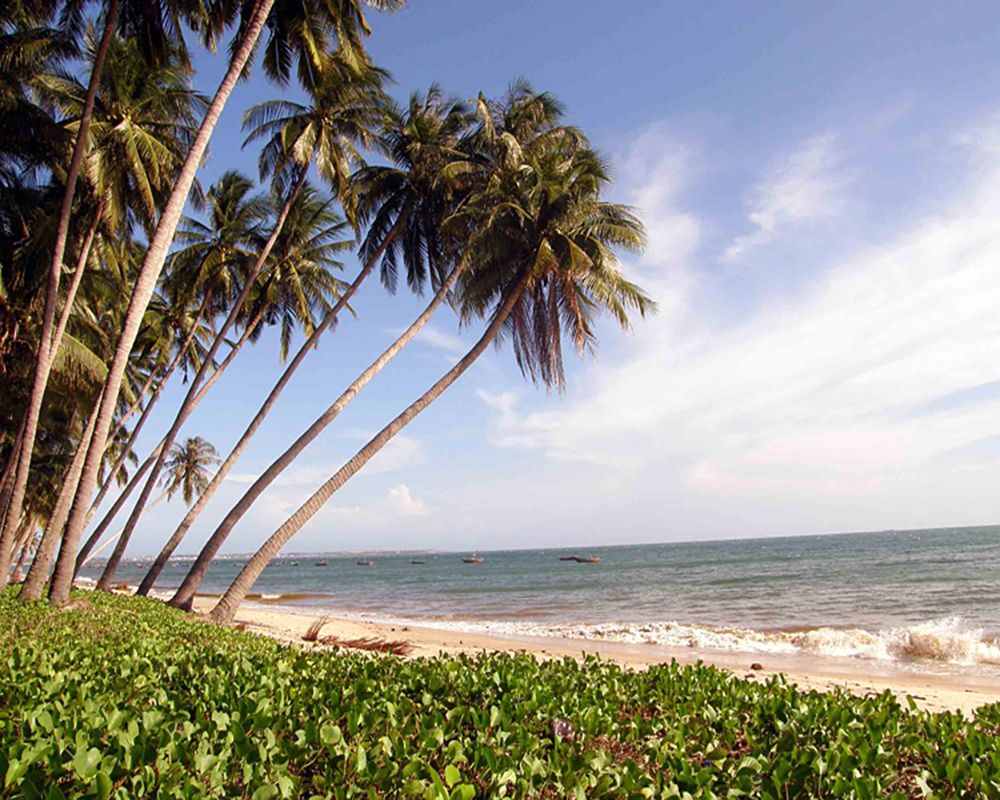 Rang Beach was voted as one of the most beautiful beaches of the coastal city of Phan Thiet. Different from the beaches in the city center, Rang beach is somewhat quiet suitable for those who want to find a place to rest for themselves. 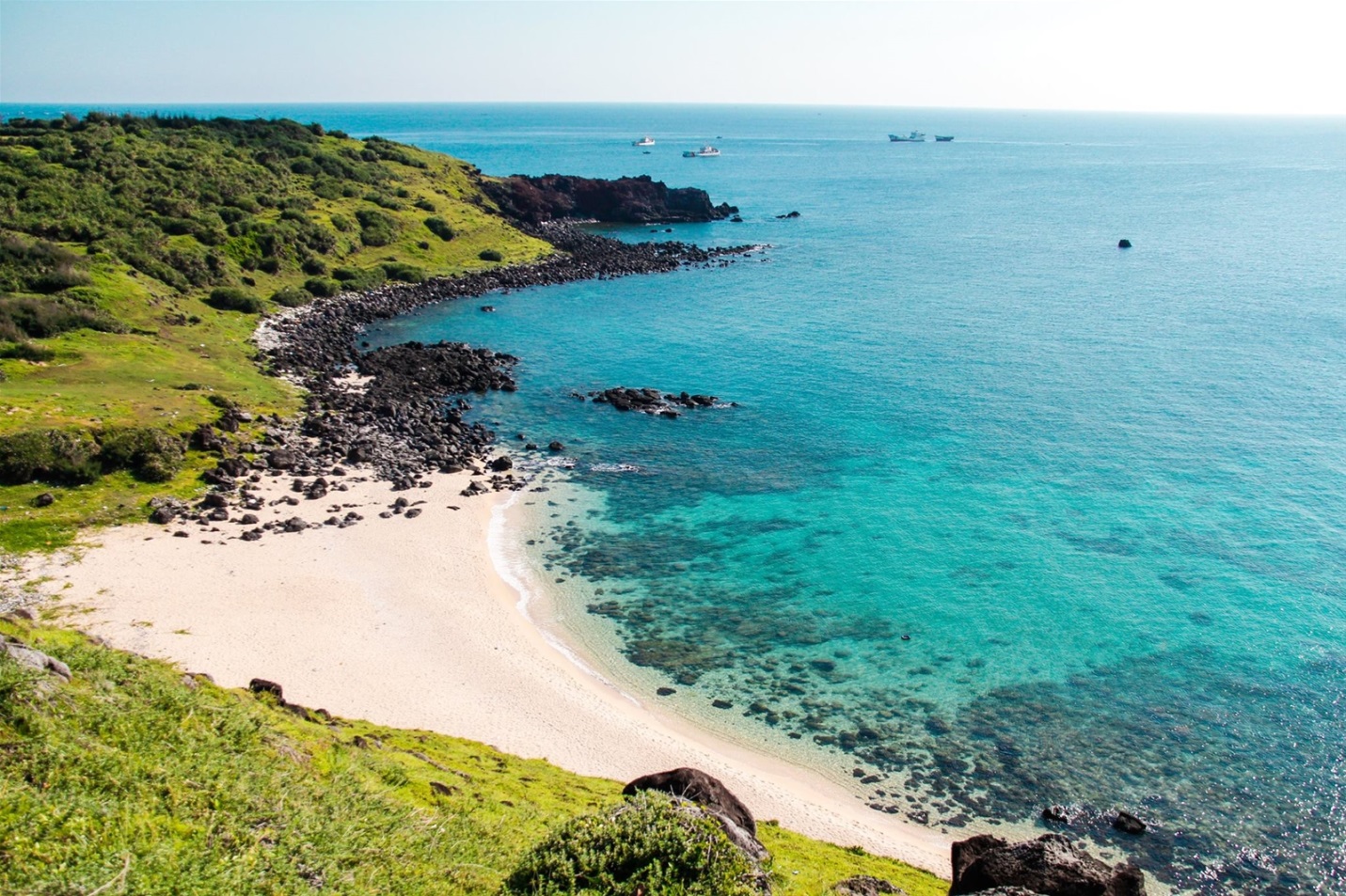 On the island of Phu Quy, there are also large pagodas such as Linh Quang pagoda, Linh Son ancient pagoda located on the top of Cao Cat mountain with unique architecture recognized as historical and cultural relic. In addition to fun activities: swimming, climbing or yachting, camping, you can also visit Tranh Islet, Den Islet, Trung Islet around Phu Quy island.

Cat Bay in Quarter 5, Mui Ne ward is very close to Rom Islet, is one of the scenes that fascinate the footsteps of poets, painters, photographers, ... Sand dunes are not only attractive tourists with large space, beautiful shape but also thanks to the change of 18 different colors of sand in a day. This factor also makes many different names for sand dunes. 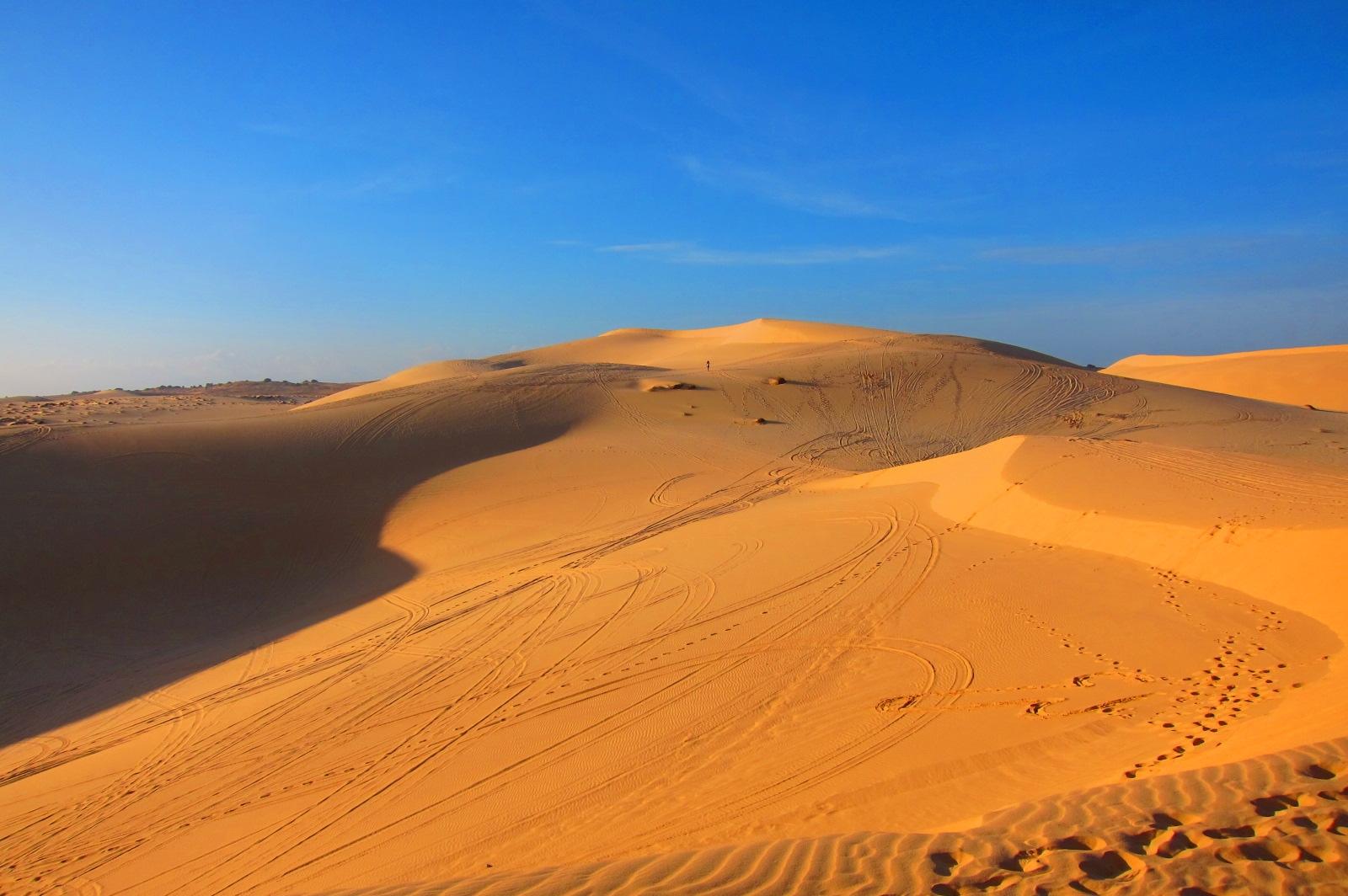 The shape of Cat Bay hill changes frequently due to wind (Source: Internet)

Walking on the iridescent sand carpet of Cat Bay hill you will feel like you are lost in the vast desert. Besides, you can also play sandboard or ride a motorbike.

Bau Trang - Bau Sen is 18km away from Rom island, from Phan Thiet city going to the direction of National Highway 1A to Luong Son junction, you will meet Bau Trang - Hon Ong and Bau Sen - Bau Ba not far away. 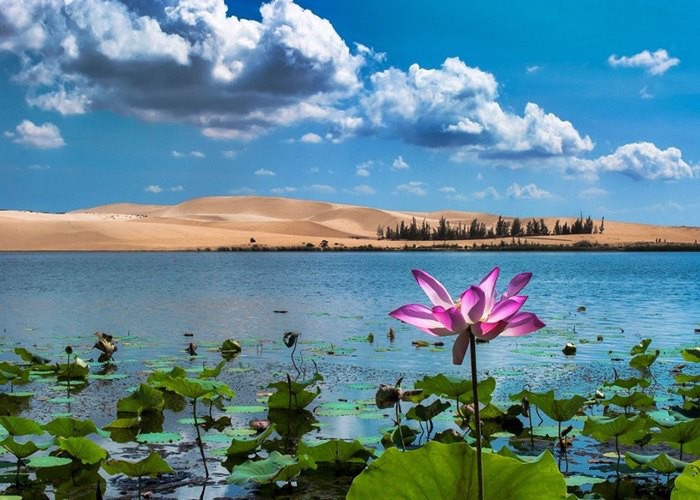 Bau Trang - Bau Sen is like an oasis in the white sand desert (Source: Internet)

Co Thach Beach is located in Binh Thanh commune, Tuy Phong district, about 100km from Phan Thiet. Unlike other beaches, Co Thach beach is only rock and sand, but this also makes the unique scene here attracts visitors to visit and admire this impressive beauty. 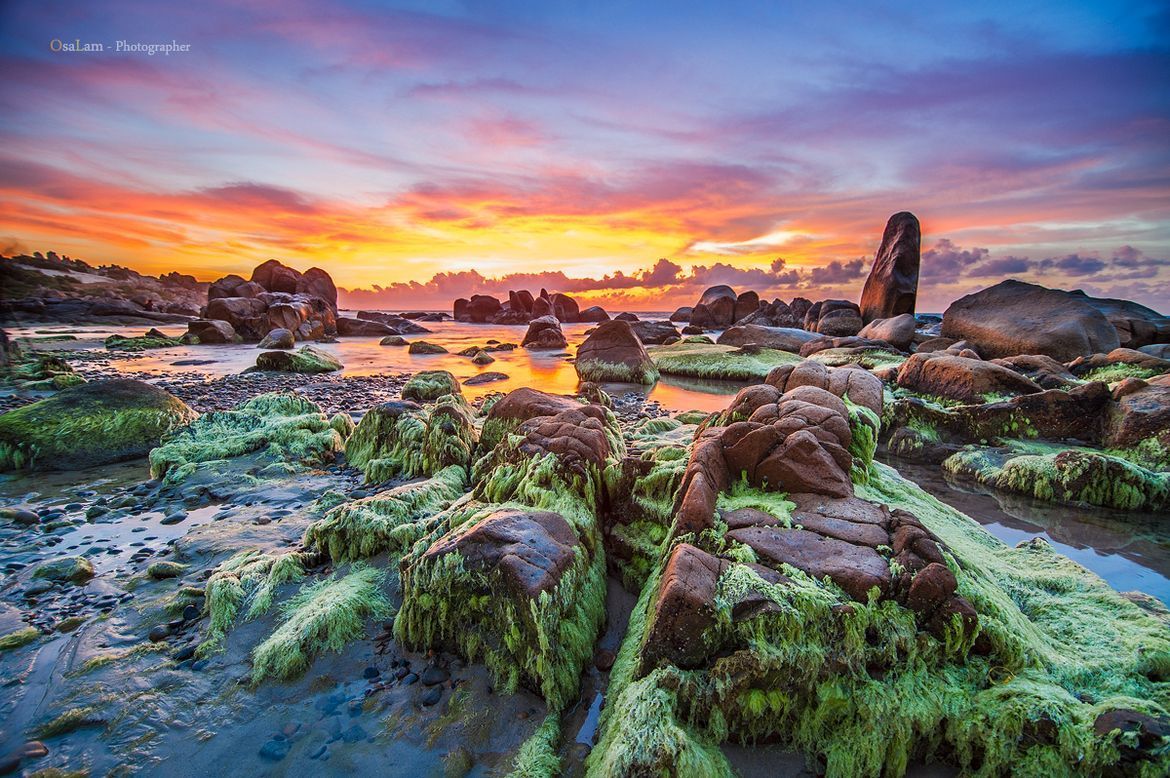 The 7-color rocky beach located in the Co Thach tourist area has many different sizes and shapes, recognized by the Center of Vietnam Records as ‘The most shaped and colored rock beach in Vietnam”. Especially in March, the rocks are covered with green moss, making Co Thach beach hard to resist.

Located close to National Highway 1A, in Thuan Nam town, Ham Thuan Nam district 30km south of Phan Thiet city, Ta Cu Mountain is a popular tourist destination known to many people. On the top of the mountain, there are two famous pagodas, Linh Son Truong Tho Pagoda and Long Doan Pagoda, not to mention the 49m-long reclining Buddha statue which is considered the largest reclining Buddha statue in Southeast Asia. And do not forget to explore the To cave with the legend of the pure enlightened man here. 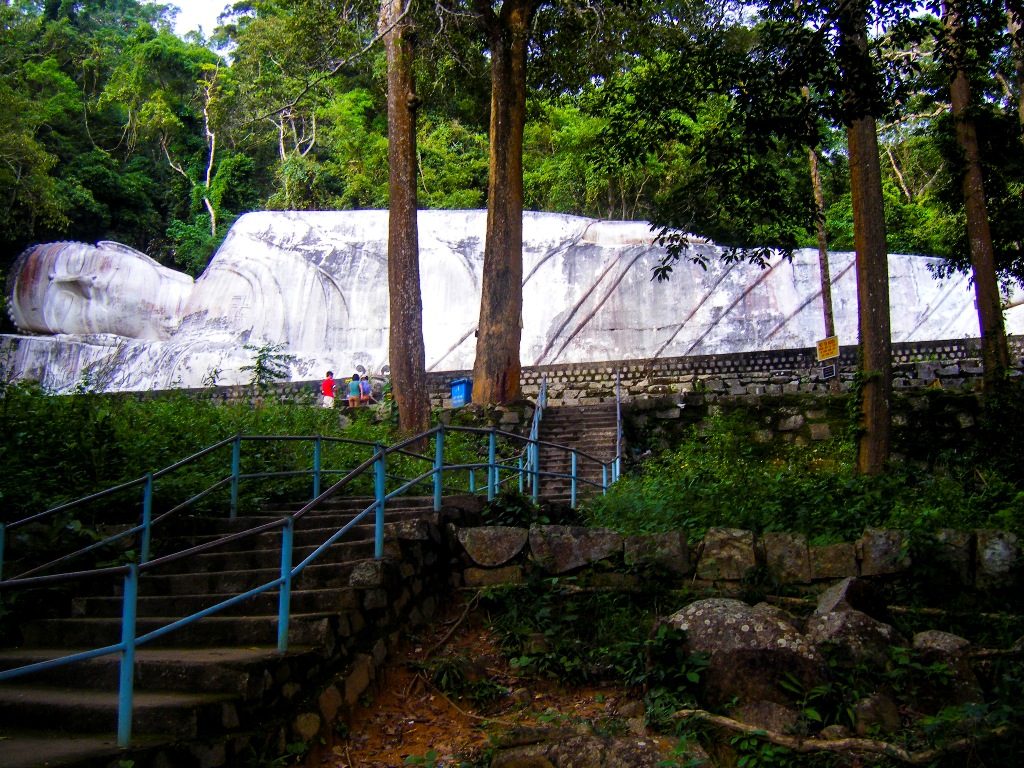 Visitors can conquer the top of the mountain by walking over 1,000 steps while experiencing the wild, majestic nature or you can travel by cable car only 15 minutes to arrive.

Ke Ga Cape also has another name is Khe Ga cape in Thuan Quy commune, Ham Thuan Nam district, Binh Thuan province. This site is a cape jutting out into the sea about 40km southwest of Phan Thiet city center. At high tide, Ke Ga cape is separated like an island, but when the water recedes or in dry season, a strip of land appears connecting the fishing village and the mainland. Camping in Ke Ga or basket boat are hard experiences to ignore. 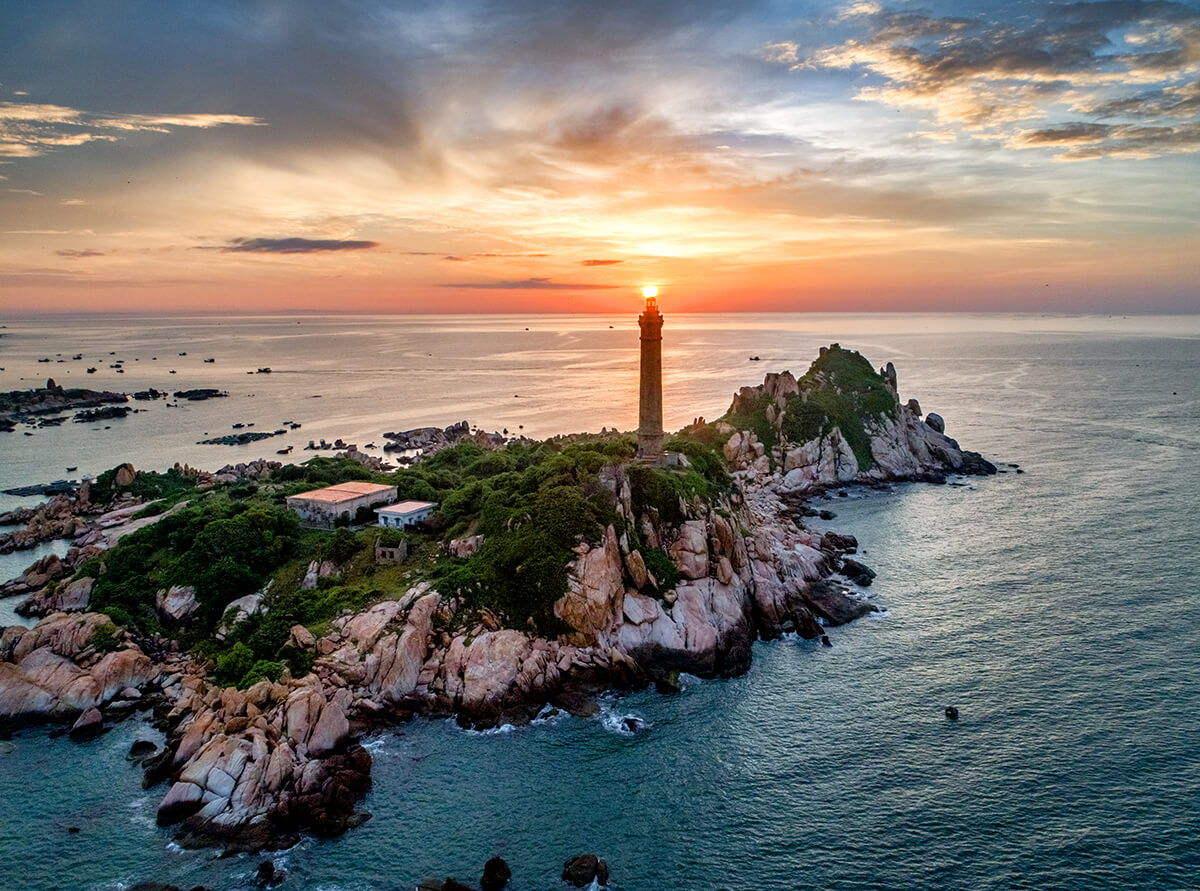 To the most famous Ke Ga cape is the Ke Ga lighthouse built by the French in 1897 so far is considered the oldest and second tallest lighthouse in Vietnam. It is not only an attractive tourist destination but also extremely important to the people of Phan Thiet and the fishermen here.

Although not a tourist destination of Phan Thiet city, but DT716 is a must-see place on the way to Phan Thiet. The road called DT716 stretching 40km from Luong Son junction to Phan Ri is known to be one of the most beautiful roads in Vietnam, it goes through 2 freshwater lakes Bau Trang - Bau Sen famous in Binh Thuan. 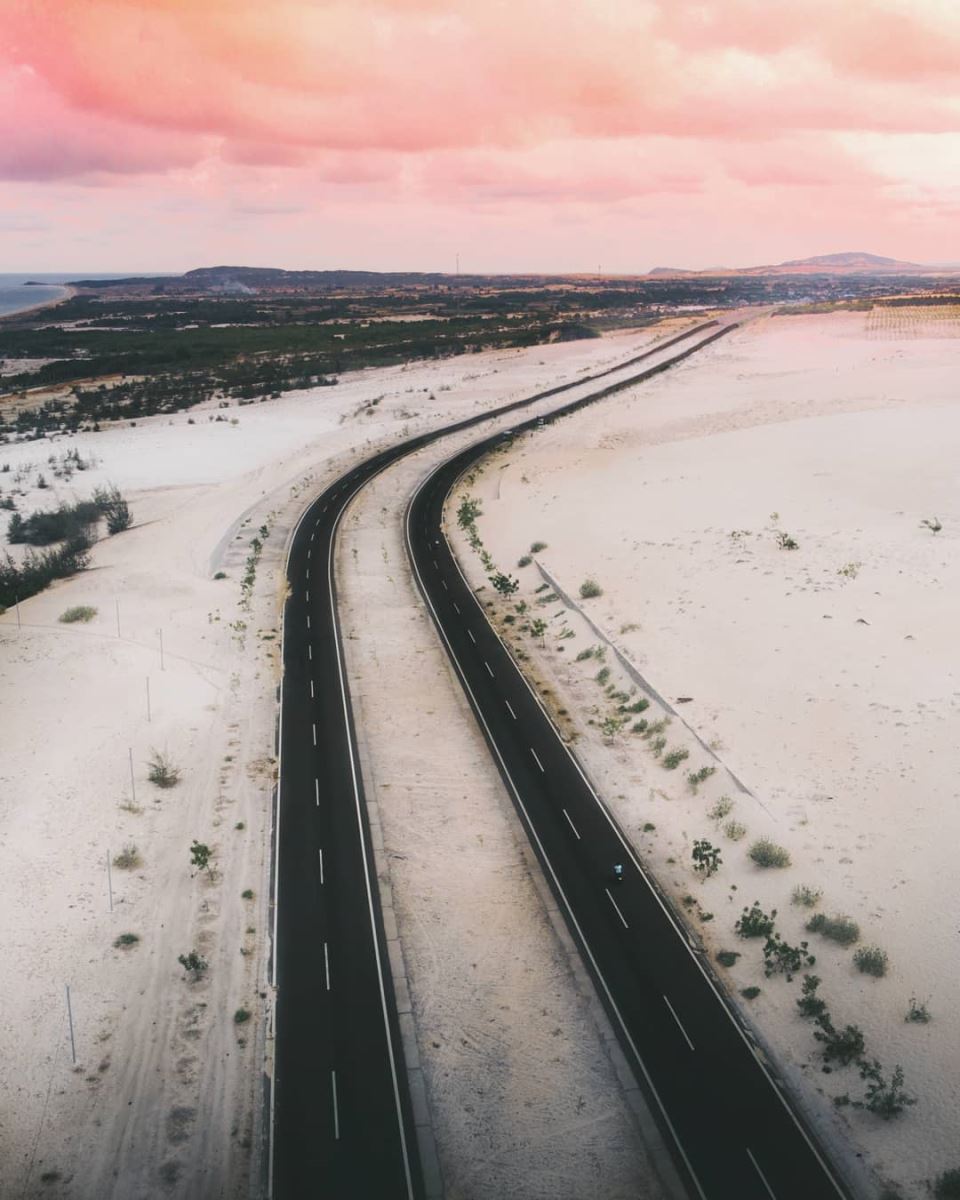 DT716 one of the most beautiful roads in Vietnam (Source: Internet)

DT716 - a long stretch of road with white sand slopes and wild steep hills creating a picturesque scene that attracts many young people to check in and take extreme pictures.

Fairy Stream is actually just a small stream located next to Rom Islet, bordered on one side is a hillside and a forest on the other. However, unlike other normal streams, Fairy Stream has many small, white stalactites formed by nature's gift and the erosion of time carries the characteristic red-orange color of Phan Thiet. 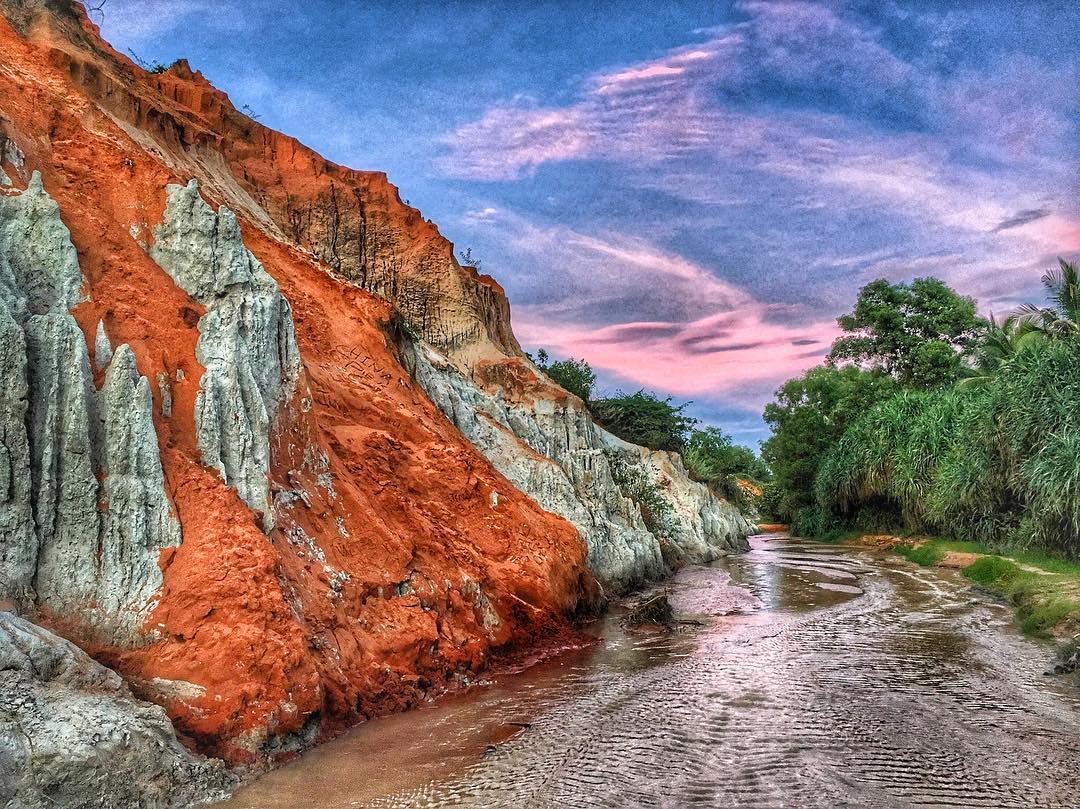 Fairy Stream is like a place of "  heaven and earth"  (Source: Internet)

Although there are not many fun activities, Fairy Stream still attracts many tourists every year because of its unique and impressive natural scenery.

Cau Isle is a pristine island in Phuoc The commune, Tuy Phong district surrounded by thousands of rocks with very unique shapes, at times of day they will have different colors and points lush green grass. 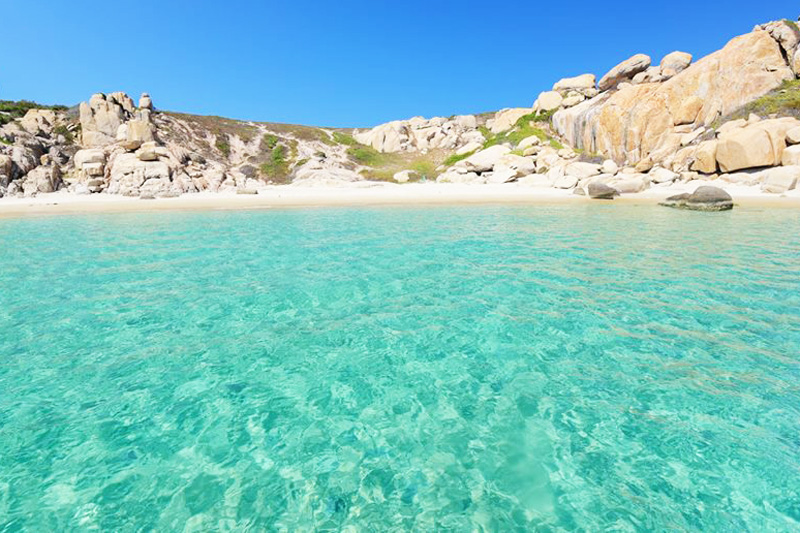 Currently, with the diverse ecosystems of Cau Isle, it is planned to be a marine conservation area and eco-tourism development.

The wine castle is located on the campus of the 5-star Sea Links City resort in Phu Hai ward with ancient and luxurious architecture. There are more than 20,000 bottles of wine stored at 13-18 degrees Celsius along the aisle in the cellar. 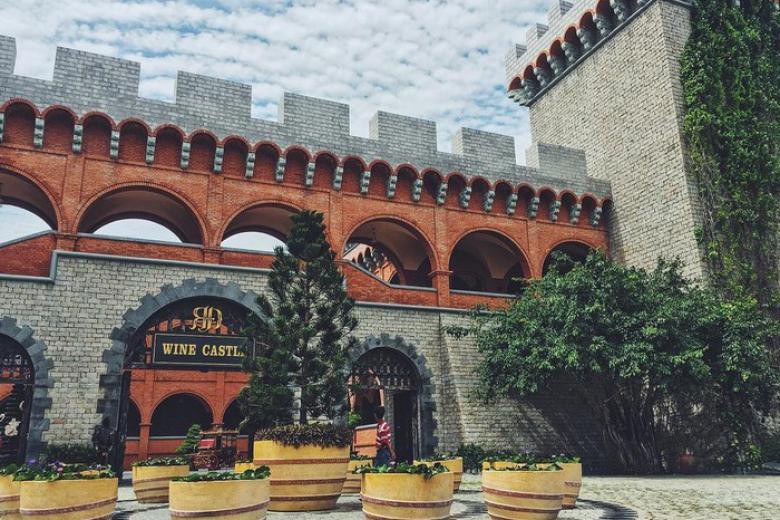 At the Wine Castle, visitors can not only visit but also sample wine and can buy it to take home.

Coco Beach is a picnic and camping area located on Le Minh Cong street in Mui Da village, Tan Phuoc commune, LaGi town, Binh Thuan province. The great combination between camping, swimming and relaxation is a suitable place for those travelers who want to enjoy their time traveling with family or friends. 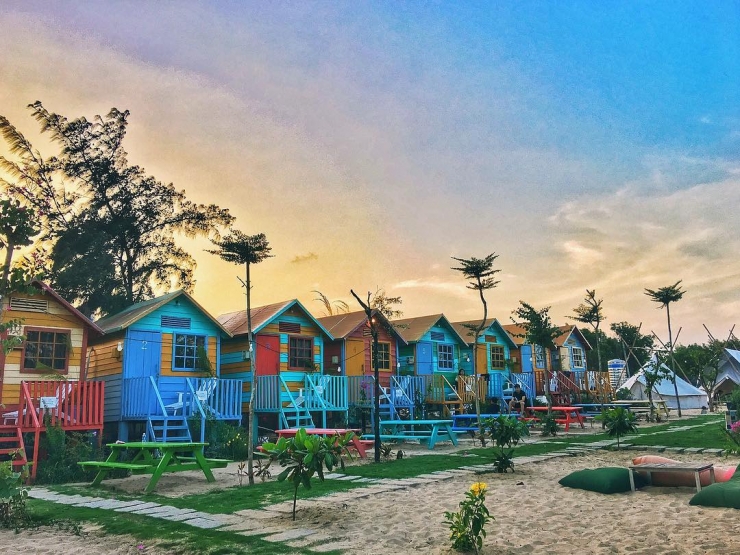 The beautifully designed homestay, villas and resorts even you can choose to sleep in tents. Not only that, coming to Coco Beach Camp, you can also participate in games and experience activities at sea such as campfire, outdoor BBQ party, Kayat rowing, ...

In addition to the aforementioned locations, Phan Thiet also has other tourist attractions that attract tourists to visit such as Dinh Van Thuy Tu, Ganh Son, Hang Pagoda, Ong Dia Stone Beach, Ghenh Islet – Lao Islet or the high-end resorts along the coast are not too crowded but very peaceful.