HUẾ - THE PLACE OF THOUSANDS YEARS OF HISTORY

Huế was once the capital of ancient Vietnam under the feaudal lordship of Nguyễn Dynasty (from 1802 – 1945). This place not only records a part of Vietnam’s history but also leaves a mark on the history of culture and artistry, being home to various palaces, fortresses, imperial tombs, etc… These are not only the heritage of Vietnam but also the heritage of the world.

Huế Imperial Citadel, or also known as Thuận Hóa Imperial Citadel, is located on the northern side of the riverbanks of Hương River, in Huế City, Thừa Thiên – Huế province. Huế Imperial Citadel is one of the few historical sites that are enlisted in the system of the Old Huế City’s cultural heritage. This system of heritage include the Complex of Hué Monuments, Huế court music, “Mộc bản triều Nguyễn”- Woodblocks of the Nguyễn Dynasty used for printing, “Châu bản triều Nguyễn” - the collection of official government’s documents  approved by the emperors of Nguyễn Dynasty, and also  the system of Poetry on Hue Royal Architecture. 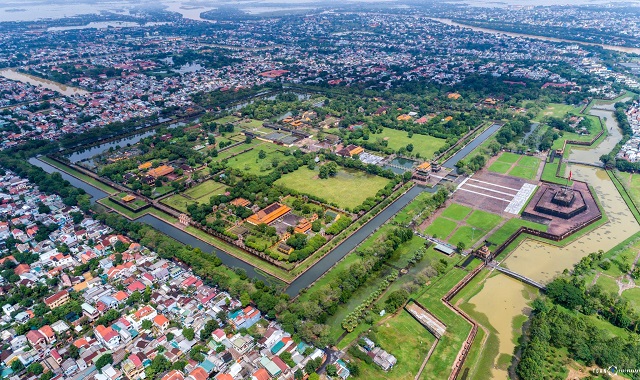 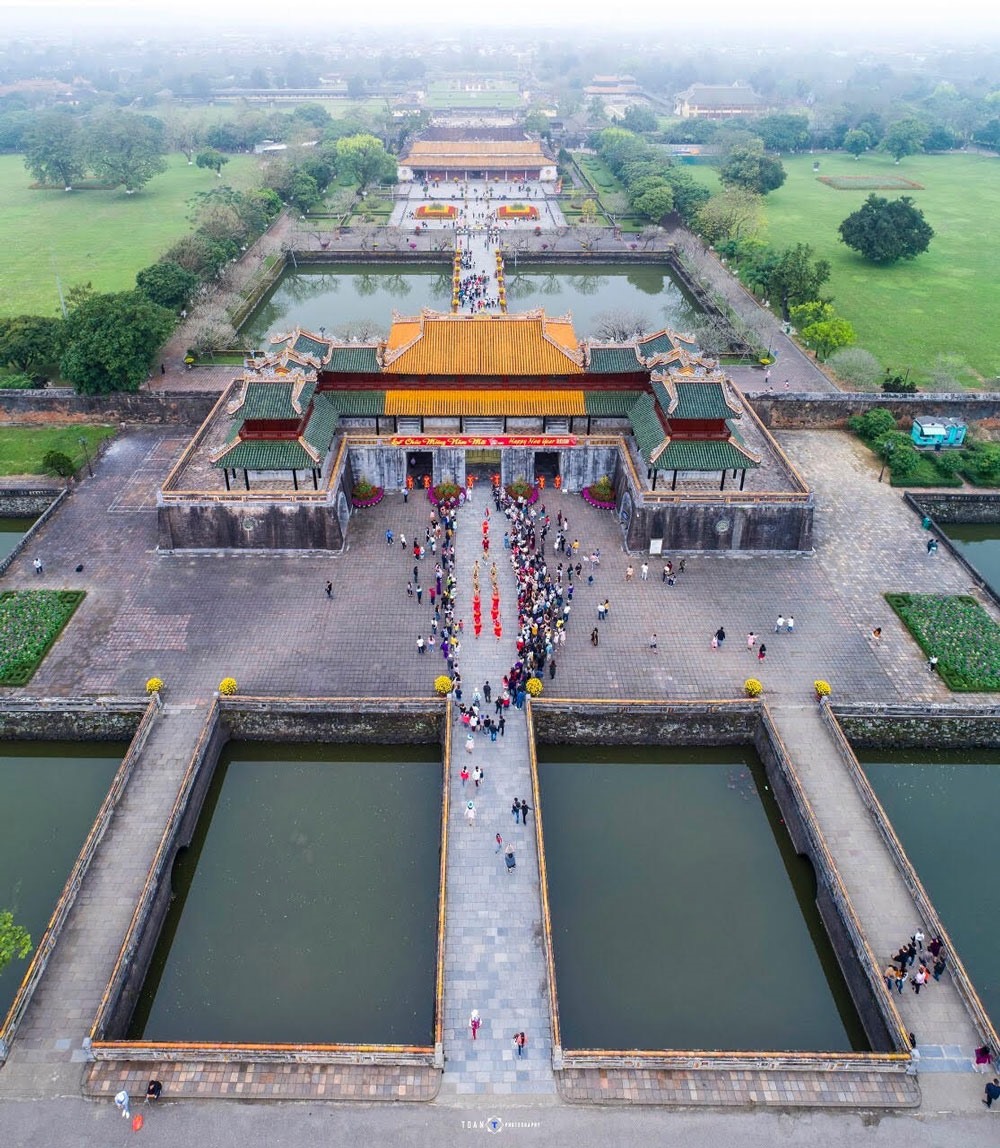 Huế Imperial Citadel covers a vast area, and was onced the official capital of the Nguyễn Dynasty for 143 years, starting from 1802 to 1945. The building of the place was initiated by Emperor Gia Long and continued then finished under Emperor Minh Mạng’ reign. At the location, emperors of Nguyễn Dynasty had given out orders to build many fortress walls, palaces and other court buildings. After 200 years, Huế Imperial Citadel nowadays still preserves almost as original nearly 140 buildings of different scales. 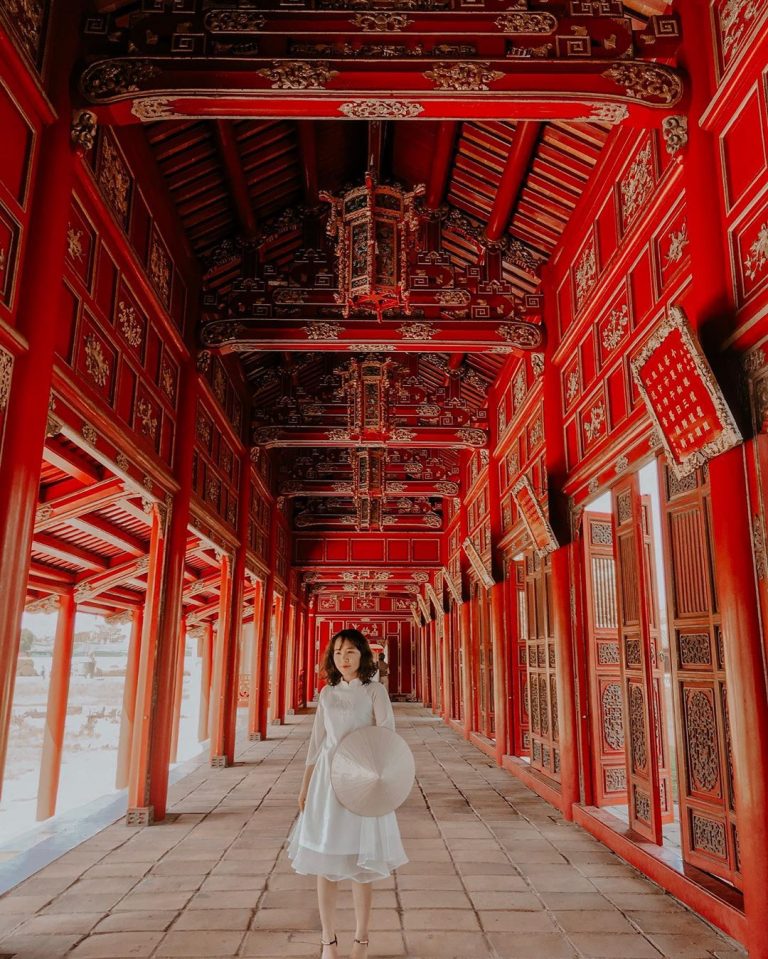 An architecture built from ironwood (tali wood) that is still intact. Source: @ngocmaii25

Gia Long Imperial Tomb or Thiên Thọ Imperial Tomb, lies in the middle of the mountainous range of Thiên Thọ, in Hương Thọ Commune, Thừa Thiên – Huế province. This is where Emperor Gia Long (born 1762 – died 1820) was laid to rest. The Emperor was the founder and the first of 13 rulers that reigned Nguyễn Dynasty. 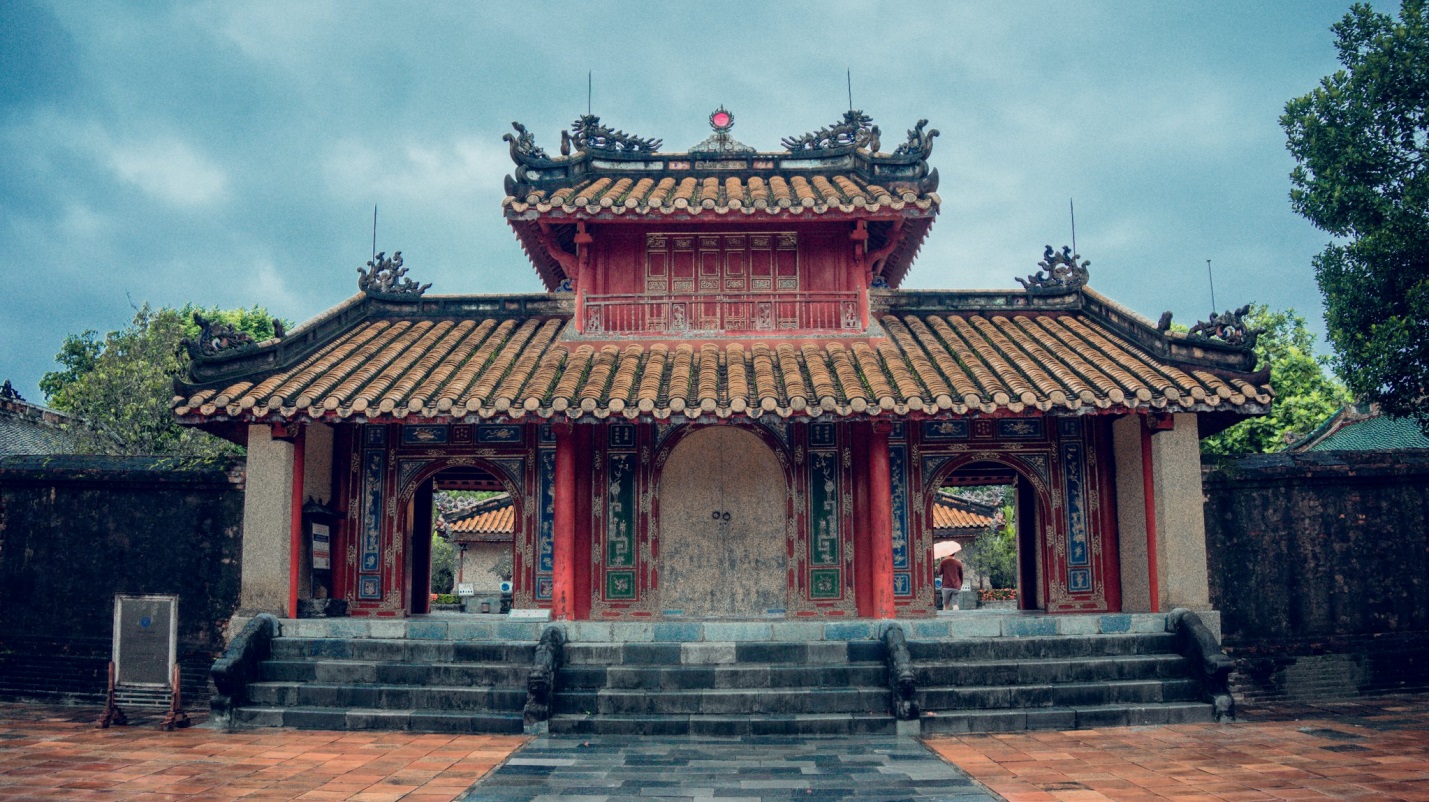 Built from 1814 and finished in 1820, Gia Long Imperial Tomb covers an area of over 11000 square meters, facing Đại Thiên Thọ Mountain. Both sides of the Imperial Tomb, each has 14 mountain tops standing tall, taking the shape of “Tả thanh long” and “Hữu bạch hổ” positions in feng-shui. These are roughly translated as “Green Dragon on Leftside” and “White Tiger on Rightside”.

Gia Long Imperial Tomb’s position follows the stream of Hương River, and this place has refreshing weather all year round. The middle part of the Imperial Tomb if the tomb of Emperor Gia Long and his wife Thừa Thiện Cao.

Minh Mạng, or Hiếu Imperial Tomb, is located on the top of Cẩm Khê Mountain, near the three-way intersection of Bằng Lãng, 12 kilometers away from the center of Huế City. This place is the resting place Emperor Minh Mạng – the second ruler in Nguyễn Dynasty. 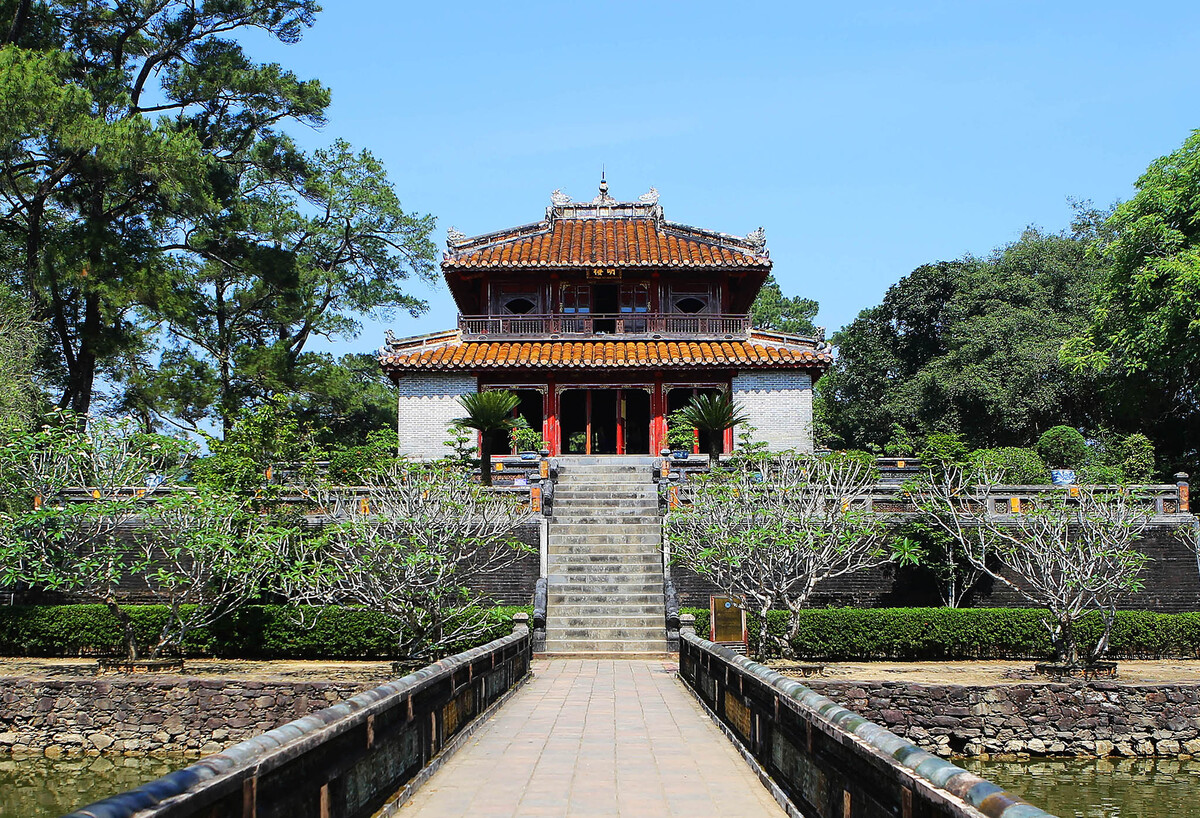 The construction of this Imperial Tomb was begun in 1840 and completed in 1843. The Imperial Tomb covers a large area of 26 hectares, consisting of 40 buildings of different scales. These are situated on a magnificent area with the landscape of mountains, hills, rivers and lakes with refreshing air. The complex lies next to a pond of lotus flowers and is surrounded by lines of pine trees. In front of the Imperial Tomb, there are 3 gates. Đại Hồng Môn Gate (roughly translated as Big Red Gate), standing in the middle, opened only once when the complex received the body of Emperor Minh Mạng in his funeral. The two side gates are called Tả Hồng Môn and Hữu Hồng Môn (namely Left Red Gate and Right Red Gate). Further into Đại Hồng Môn, there is a royal court, with each side holding lines of sculptures, portraying the ancient officials with horses and elephants waiting for orders.

Tự Đức or Khiêm Imperial Tomb, is situated in a narrow valley of Thượng Ba village, Thủy Xuân Commune, Huế City. It is almost hidden in a vast natural landscape surrounded by lush greenery near a big lake. This place is also where the emperor used to frequent to relax, read books and poetries before passing away. 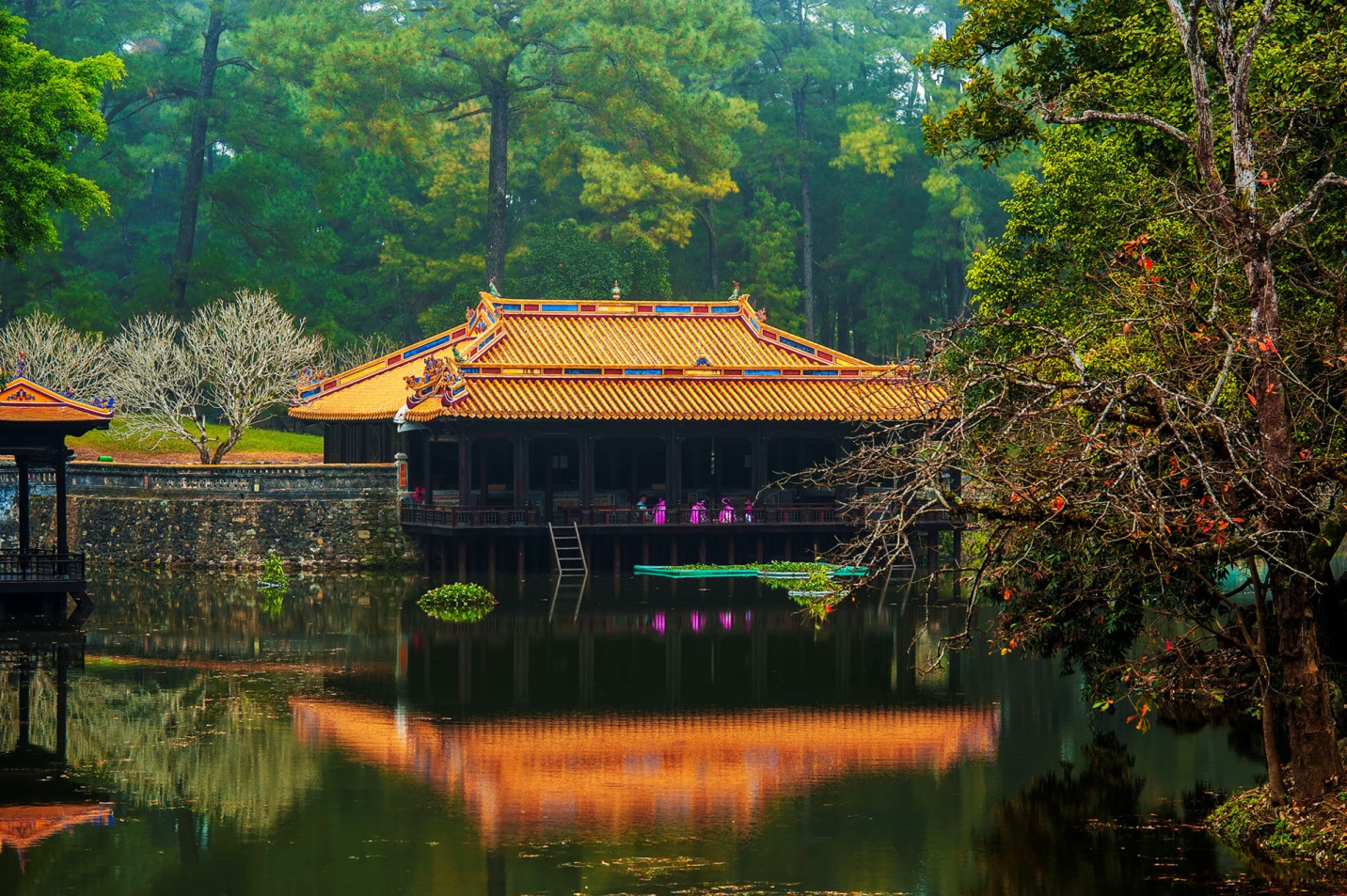 Built from 1864 to 1867, Tự Đức Imperial Tomb covers an area of 475 hectares with 50 buildings constructed. The two areas of resting palace and tomb both have the word “Khiêm” inside their names. The Minh Khiêm Royal Theatre, lying on the left side of Lương Khiêm Palace, is recognized as one of the oldest theatre preserved to this date in Vietnam.

Khải Định or Ứng Imperial Tomb lies on the slope of Châu Chữ Mountain, Thủy Bằng Commune, Hương Thủy District, about 10 kilometers southwest of Huế City. This is where Emperor Khải Định – the 12th ruler of Nguyễn Dynasty, was laid to rest 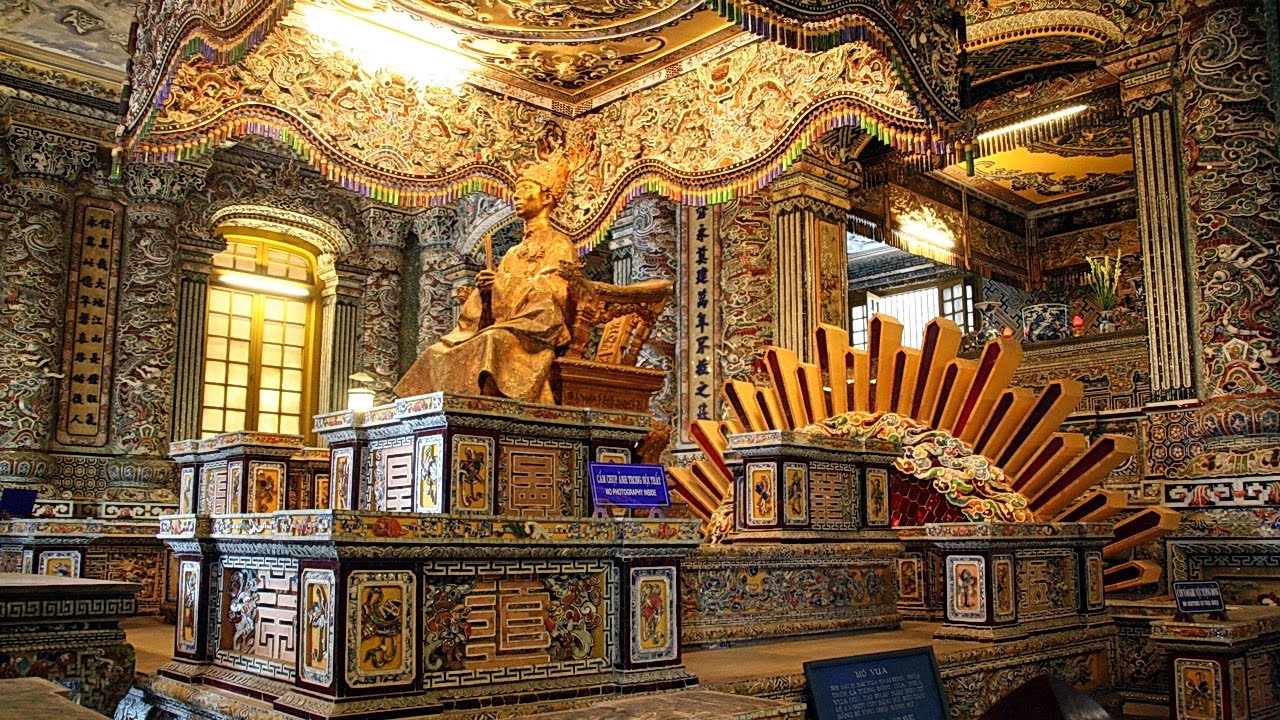 Despite its modest scale compared to the tombs of previous emperors, Khải Định Imperial Tomb is the only construction that possesses the architecture of both Eastern and Western culture. This combination can be seen from the extravagant reliefs engraved with pieces of ceremics and crystals, or the tea tray, royal crowns as well as its then-modern furniture and decorations like tennis racquets, oil lamps, etc… This emperial tomb was built in 10 years, starting from 1920 and was not finished until 1930.

Thiệu Trị Imperial Tomb, also called Xương Imperial Tomb, rests its back on the mountain of Thuận Đạo Mountain, Cư Chánh village, Thủy Bằng Commune, Hương Thủy District. About 8 kilometers away from Huế City, this is the resting place of Emperor Thiệu Trị. The site was built by his son, Emperor Tự Đức, after Thiệu Trị passed away. 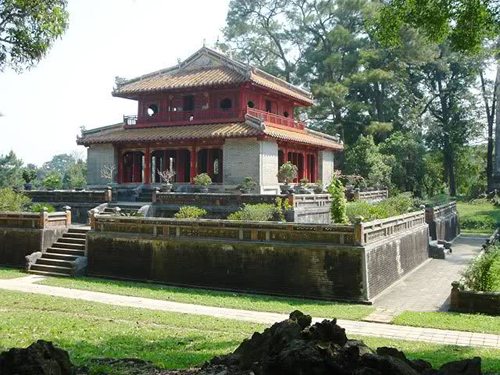 Dục Đức or An Imperial Tomb, is the shared tomb of 3 emperors: Dục Đức (father), Thành Thái (son) and Duy Tân (grandson). Built in 1889, the tomb is situated at An Cựu Ward, Huế City. 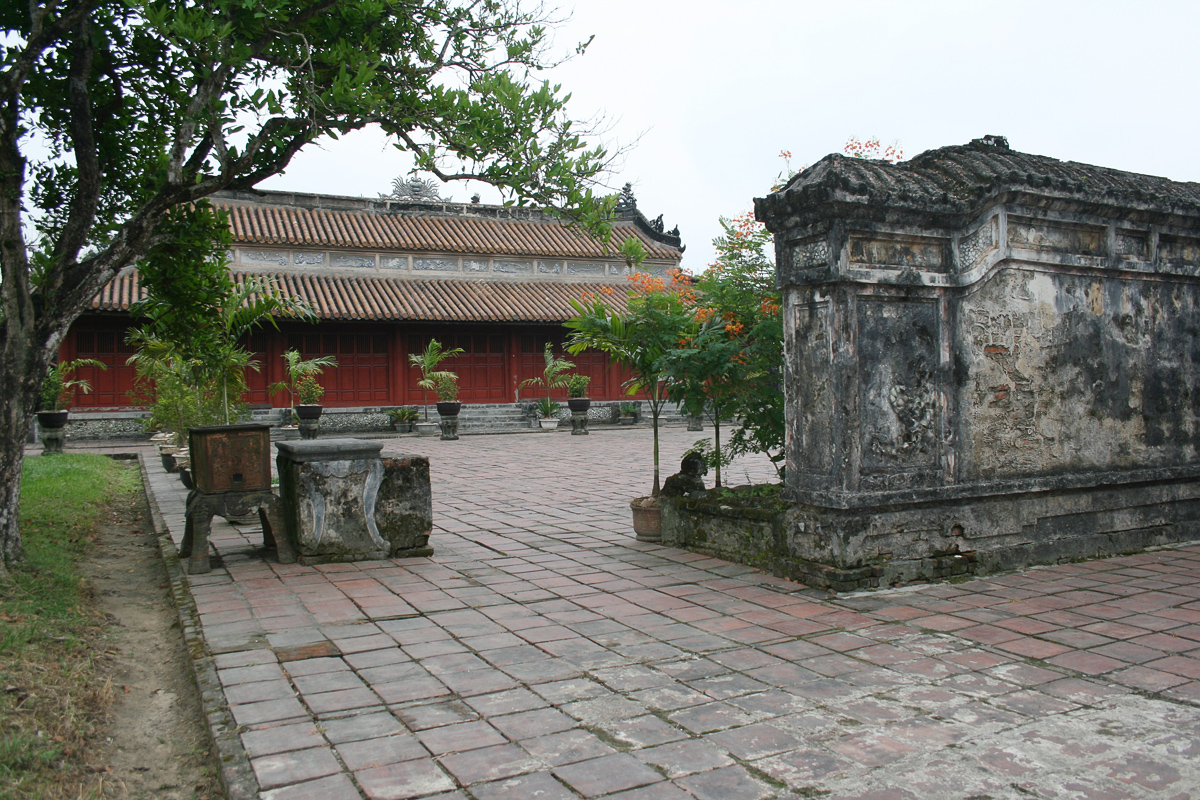 Compared to the other imperial tombs, Dục Đức tomb has a relatively modest and simple architecture, covering an area of only 3445 square meters with no pavilions or sculptures. The tomb faces Phước Quả Hill and lays its back on Tam Thai Mountain. A stream flows by the front of the tomb, creating a good land terrain in feng-shui - “minh đường tụ thủy” position (where an empty land (“minh đường”) sits facing a pond or lake (“tụ thủy) and even more ideal if covered by mountain in the back. In addition, this position and its landscape resemble ancient officials presenting themselves in royal court, awaiting orders from the emperor.

Not only is Dục Đức tomb the resting place of 3 emperors, it also is where royal family members and relatives were laid to rest. There are 39 royal tombs of people of noble ranks and 121 common tombs of people in the family ancestry of Emperor Dục Đức – Nguyễn Phước family.

Đồng Khánh Imperial Tomb, also called Tư Imperial Tomb, is the tomb of Emperor Đồng Khánh. It is situated in Thượng Hai village, Thủy Xuân Commune, Huế City. Lying between the 2 imperial tombs of Thiệu Trị and Tự Đức, the site was built in 35 years, spanning the reign of 4 different rulers of Nguyễn Dynasty, from 1888 to 1923. 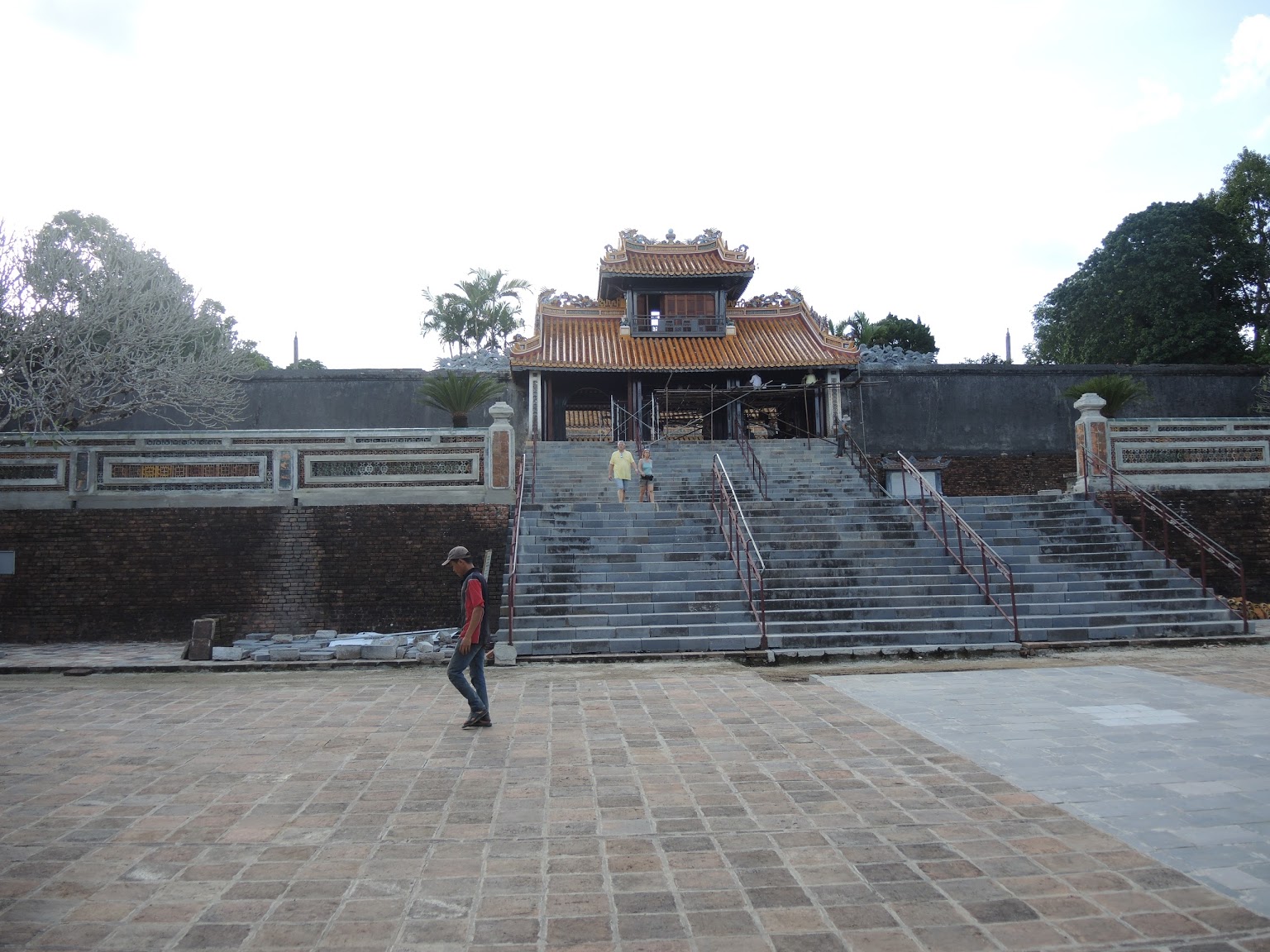 Đồng Khánh Imperial Tomb features the more tradional way of architecture, with a certain impact from Western Europe architecture of that time. This combination creates a unique charm for the imperial tomb. Ngưng Hy Palace is considered the place where the famous lacquer art of Vietnam is most preserved. This place is house to 24 lacquer drawings of illustrations in the folklore classic “Nhị thập tứ hiếu” (24 fidelity rules), a book telling stories about exemplary fidelity in ancient Chinese. The place is also built with a system of glass windows that are varied in color.